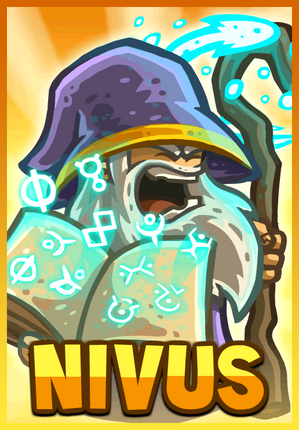 Nivus the Grand Wizard is a hero in Kingdom Rush: Frontiers. He costs $0.99 on Flash and mobile. He is unlocked at stage 9 on the Steam version.

A bit more eccentric than wise, he wrote most spells taught today in the Wizard’s Academy. Nivus wields an astounding power… and with such power comes great responsibility.

Teacher of many, master of none, his magic as unfathomable and unpredictable as his ramblings. He wields great arcane powers with unexpected good judgement as he is fully aware that with great powers comes great lawsuits.

Mess with a wizard and you'll know true regret, but mess with an Archmage and everyone will.

Shoots a regular bolt that pierces to an additional 2/3/4 enemies.

Disintegrates enemies in range with a combined total health of 170/330/480 or less.

When all of Nivus' abilities are active, he uses them in this order:

Nivus regenerates 10% of his maximum health per second, taking 10 seconds to fully heal.

Nivus is a fragile hero adept at harassing enemies. His good base magic damage and long range excel in hurting a few enemies from afar, beyond the range of most ranged enemies, making up for his low health count and lack of armor. Above all, Nivus can also teleport, so he can quickly get away from any approaching danger, as well as supporting multiple areas almost simultaneously. When using Nivus, the most important thing to remember is to build at least one sufficiently strong barricade of Barracks, so as to provide shelter for Nivus to hide while attacking enemies.

Nivus is designed so that you only need to pay minimal attention to him and he can still achieve full potential, thanks to the great range he has. The player should only need to position Nivus to an optimal position a good distance from clustered foes, and let him do his job.

A few last things to note about Nivus: 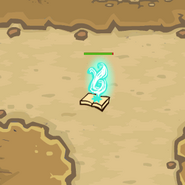 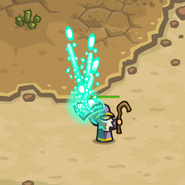 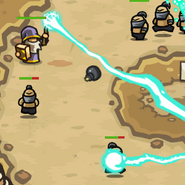 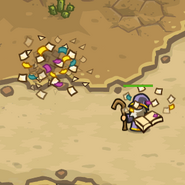 "Excelsior!"
Add a photo to this gallery

View All Heroes
Retrieved from "https://kingdomrushtd.fandom.com/wiki/Nivus?oldid=52970"
Community content is available under CC-BY-SA unless otherwise noted.