Oni is a hero in Kingdom Rush. He is unlocked by paying $4,99 as an in-app purchase (on mobile) or by finishing Forsaken Valley (on Steam). He is not available in the Flash version.

Relentless warrior, in search of vengeance, his name inspires fear among the demon armies he faces. Armed with his dark honor and blazing katanas!

Physically, Oni is a very tall warrior, standing to the height of a Dark Slayer and possessing nearly equal strength. He is burgundy red, with bright red flames surrounding his two katanas. Oni is very fast and can move from enemy to enemy quickly, leaving a trail of dead bodies in his wake. 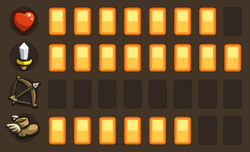 Oni stabs his swords into the ground, using ancient magic to summon the swords wielded by warriors who died in the area long ago, to rise and stab enemies from beneath, dealing True Damage. (Cooldown: 15 seconds)

Oni raises his sword above his head, channelling the ancient power of the Gods to smite a single foe with incredible power, dealing True Damage. (Cooldown: 10 seconds)

Oni is a pure melee hero specialized in one-on-one combat, capable of annihilating any foe.

Oni has a lot of health, and is protected by good armor. He can stand for a while against most foes, even huge ones like Yeti and Forest Troll. Like all Kingdom Rush heroes, Oni recovers 25% of his max health each second while idle (when neither moving nor engaging). For example, Oni heals 144 health per second at level 7, 150 at level 8, 156 at level 9, and 163 at level 10. In other words, Oni takes 4 seconds to go from 1 HP to maximum. Oni needs a relatively short period of idle time to start healing, compared to some other heroes such as Hacksaw, who's healing takes longer to begin - although the differences among them are slight. 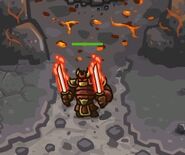 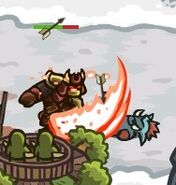 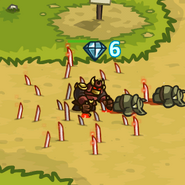 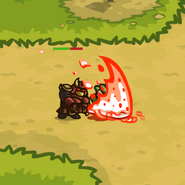 Seppuku
Add a photo to this gallery

View All Heroes
Retrieved from "https://kingdomrushtd.fandom.com/wiki/Oni?oldid=54715"
Community content is available under CC-BY-SA unless otherwise noted.