The Pirate Cap is a special manually-controlled tower that appears in Buccaneer's Den. He operates a cannon battery that fires one or several shots that hit enemies in a small area.

The Pirate Cap is the owner of the smaller ship to the left. For a small sum of money, he can be paid to fire the cannonade battery on the starboard side of his ship:

A second after that, the cannons will fire on the selected spot, dealing 60-120 damage per shot to enemies in a small area. There is no cooldown. If a cannonade shot is bought and then the player taps off the path, a speech bubble will appear coming from the Pirate Cap saying "Tap the road!"

The Cannonade can be used in a similar manner to Rain of Fire, with the limitation being money rather than the cooldown. Its shots can be very efficient against dense groups of enemies or to catch lone leaking enemies, but not so much against lone, tough enemies like Executioners.

THE BLACK PEARL Kill 30 enemies with the pirate ship cannons. 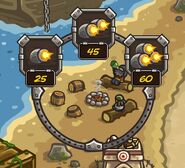 Cannonade preparing to fire
Add a photo to this gallery

View All Towers
Retrieved from "https://kingdomrushtd.fandom.com/wiki/Pirate_Cap?oldid=54019"
Community content is available under CC-BY-SA unless otherwise noted.