Quincon is the second boss in Kingdom Rush: Frontiers, encountered at the Temple of Saqra. It is a giant gray gorilla that carries the Warlord King of the Ma'qwa tribe on a howdah on its back.

Fury and strength wrapped in hair and muscle, this giant ape is the stuff of legends.

Quincon jumps to the battlefield at the end of wave 15, then proceeds to move towards the eastern exit.

Quincon has a ranged attack, during which it jumps to the stone pillar in front of the temple's entrance, then throws powder kegs at your men, and finally jumps to the point reflecting its previous position on the opposite path; at this point the Warlord King will use his scepter to heal Quincon by 500 health. In addition, during the battle, Mandrilos will constantly swing into the battlefield to attack.

When Quincon dies, it falls back-first to the ground, crushing the Warlord King who makes a futile attempt to escape.

Quincon is fairly simple to beat. Because of his ranged barrels and his ability to jump around, barracks are not very effective against him, and nor are necromancers. Use a combination of Crossbow Forts and Archmages to defeat Quincon, and leave the Mandrilos to your artillery - preferably Battle Mechas rather than the DWAARP, the latter of which does not have the necessary damage output to defeat them. 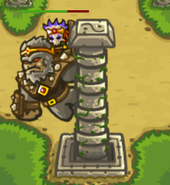 Quincon on a stone pillar

Playing monkeys
Add a photo to this gallery

View All Enemies
Retrieved from "https://kingdomrushtd.fandom.com/wiki/Quincon?oldid=52867"
Community content is available under CC-BY-SA unless otherwise noted.