The Rangers Hideout is a Level 4 ranged tower, with a good range and a high rate of fire. Its spells include Wrath of the Forest, which traps ground-based enemies in place, and Poison Arrows, which deals true damage over time.

When compared to its counterpart, the Musketeer Garrison, the Rangers Hideout deals more damage over time and has generally better crowd control. However, its range is noticeably lower and it performs poorly against heavily armored and large targets, which its counterpart is more suited for.

"Legendary masters of the bow, they can unleash a hail of arrows faster and further than any other force in the realm."

Perched on platforms placed in an ancient tree, Rangers fire a deadly rain of arrows at the enemy, with the fastest fire rate in the game. They are masters at taking down light and medium enemies, although their damage per shot is rather minimal. The Rangers Hideout is the first advanced tower to be introduced in the game, making its first appearance in Silveroak Forest.

While its Poison Arrows do allow it to take down some weaker armored troops, it's best not to rely on them. One should place the Rangers Hideout next to large groups of unarmored enemies, where Wrath of the Forest can be used to its full extent, such as near graveyards or demon portals.

Poisons enemies, causing them to take True Damage over 3 seconds. A Rangers Hideout upgraded with Poison Arrows prioritizes enemies which are not immune to poison but are not currently poisoned, this is however not consistent on all versions, and some will switch to targeting enemies closest to the exit once all vulnerable targets have been poisoned. This effect does not stack.

The following enemies are immune to poison:

Summons thorns and vines that trap up to 8 enemies* in the range, dealing 40 physical damage every second. This ability takes two targets to trigger in some cases. (Cooldown: 8 seconds)

Wrath of the Forest does not affect Spectral Knights. This is most likely because they are immune to physical damage.

The Rangers Hideout is one of the most versatile towers in Kingdom Rush, with the fastest fire rate in the game (0.4s), great range, good DPS, and abilities which allow them to manage groups of small enemies and weaken armored enemies. Although they cannot do much against the more powerful enemies, these masters of the bow will prove useful in almost all situations.

ENTANGLED Hold 500 or more enemies with Wrath of the Forest. 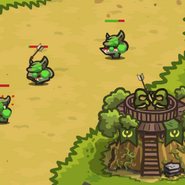 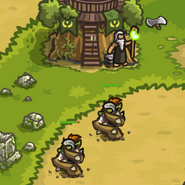 Wrath of the Forest
Add a photo to this gallery

View All Towers
Retrieved from "https://kingdomrushtd.fandom.com/wiki/Rangers_Hideout?oldid=55047"
Community content is available under CC-BY-SA unless otherwise noted.