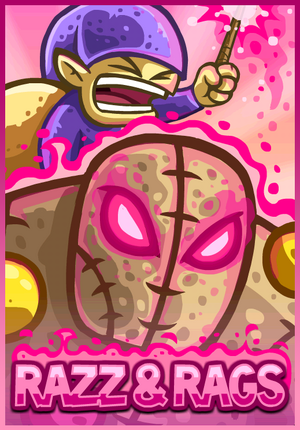 Razz and Rags are a pair of free heroes in Kingdom Rush: Origins. They are unlocked at stage 10, Neverwonder. He starts at level 5.

Ever wondered what might happen when you push a little guy to the limit? Here is your answer. As the peaceful gnomes got trampled, their homes destroyed and their lands ruined by Twilight Elves, Ogres and Gnolls... one little guy decided that enough was enough, so he built a big guy to help him out. The result is the meanest tag team in the Kingdom Rush Hero roster.

Transfigures an enemy of up to 200/600/any health into an allied fighting Ragdoll for 3/5/7 seconds.
(the description is incorrect on iOS, saying 4/5/6 seconds.)

Sends forth 4/8/12 boom-bunnies that explode on contact dealing 30-40 area True Damage each.

Transfigures up to 2*/4/6/8 enemies into allied fighting Ragdolls for 10 seconds.
(the duration is incorrectly described on iOS, saying 5/6/7 seconds.)

*:Razz's Ragdolls each have HP equal to the remaining HP of the enemy transformed.

If all of their skills are available, they'll use them in this order:

Razz and Rags are excellent in dealing with swarms of enemies. Their boom-bunnies can instantly clear a group of Gnolls and damage even giant enemies considerably, while their Hammer Time ability can stun enemies around them, stalling them for enough time to dish out extra damage. Their Hero Spell, if timed and placed correctly, can create an army of Ragdolls (up to eight at a time) that serve as temporary meat shields for other incoming enemies. One major disadvantage of Razz and Rags, however, is that their movement speed is EXTREMELY SLOW, comparable to that of an Earth Elemental, so do not rely on them for micromanagement unless absolutely necessary. The duo also fall short in terms of damage, despite the area effect that Rags possesses and Razz having a quick firing speed, the damage is so low that skills are their real strength.

Razz and Rags' range
Add a photo to this gallery 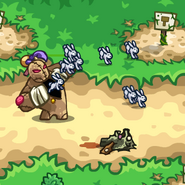 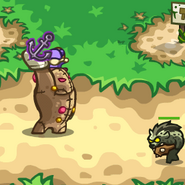 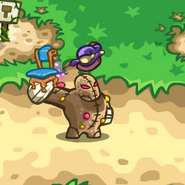 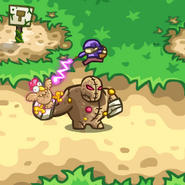 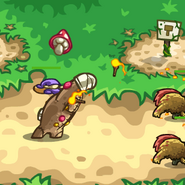 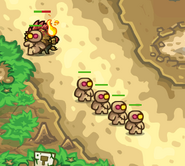 Go do that voodoo that you do, so well.
Add a photo to this gallery
View All Heroes
Retrieved from "https://kingdomrushtd.fandom.com/wiki/Razz_and_Rags?oldid=51854"
Community content is available under CC-BY-SA unless otherwise noted.