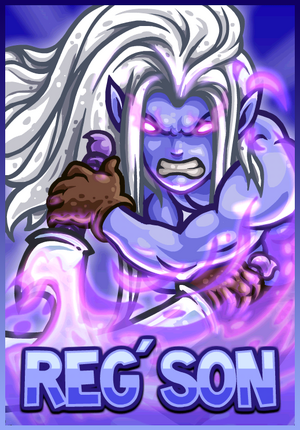 Reg'son the Eldritch Blade is a Hero in Kingdom Rush: Origins, unlocked by paying $1.99 as an in-app purchase on Mobile. He is unlocked at Grimmsburg on Steam. He starts at level 5.

Few dare combine martial prowess with eerie sorcery, none has ever mastered it like this silent young elf. The true heir to the Dark Throne of the Twilight Elves, left for dead when Malicia murdered his family. Since then he has sacrificed everything to become the deadliest warrior, the very embodiment of vengeance.

Reg'son seems like a twilight elven swordsman who was somehow abandoned by his clan and has chosen to fight alongside the Elven Army. Using his great strength and mystic skills with the blade, he is among the greatest warriors ever to exist.

Reg'son, as suggested by his quotes, seems like a twilight elven swordsman who was somehow abandoned by his clan, and has chosen to fight alongside the Elven Army. Using his great strength and mystic skills with the blade, he is among the greatest warriors ever to exist.

Reg'son is surely one of the best melee heroes around. Despite his low base damage, when fully upgraded, he can unleash devastating attacks from his Eldritch Blades, while remaining unscathed thanks to Eldritch Heal. His lack of armor limits his capability in directly confronting foes, but he can still stand for quite some time with a larger than normal health bar.

Reg'son's biggest weakness is his lack of a reliable crowd control tool. His Hero Spell, Vindicator, only affects one unit, and his AOE attack, Eldritch Slash, only affects three. Hence he is very weak when dealing with middling hordes.

When all of Reg'son's skills are active, he will use them in this order:

Reg'son is a fast and strong melee hero, focusing on demolishing small numbers of enemies. Unlike other melee heroes, Reg'son has a modest damage output and average durability due to lack of armor, however, with his very fast attacks dealing true damage and his skills, he can kill faster than many other heroes do. When using Reg'son, pairing him with good support towers, preferably those able to handle groups, such as Wild Magus, Arcane Archers and Forest Keepers is a good idea, since not only Reg'son's individual DPS without skills is low, but the lack of an AOE Hero Spell can be fatal without sufficient investment on Crowd Control.

When paired with a strong choke point, Reg'son will make it even better by killing off most of the tough enemies and heavily wounding some lesser ones. However, he is not very good at strengthening a weak defense, since he lacks good crowd control.

Below is a summary of Reg'son's strengths and weaknesses: 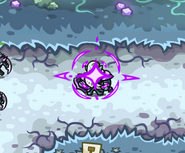 Vindication is at hand
Add a photo to this gallery
View All Heroes
Retrieved from "https://kingdomrushtd.fandom.com/wiki/Reg%27son?oldid=57487"
Community content is available under CC-BY-SA unless otherwise noted.