"General! An ancient power has risen from eons of slumber and is commanding the desert tribes in an attempt to enslave the land once again. Face him at the Ruins of Nas'de and decimate his army!"

Ruins of Nas'de is the first Endless Challenge stage in Kingdom Rush: Frontiers. The player starts with 520 gold. It is unlocked after Nazeru's Gates has been beaten.

Waves in Ruins of Nas'de are procedurally generated using these enemies:

Atop the great throne in the Ruins of Nas'de sits the self titled God King, who taunts you throughout the level much as egotistical bosses have done in the past. At his command are three different spells that can cause trouble for you in you are not prepared.

The first is an Obelisk with glowing purple runes down the side. The obelisk will appear in a path and start spawning Fallen before disappearing.

The second is a large pool of Quicksand, not unsimilar in appearance to the Sand Worm. Enemies that walk over the quicksand will disappear into it and pop up further along the path.

The third is a Sand Cloak, where small groups of enemies will become partially transparent, with small clouds of sand around them, allowing them to move past towers and soldiers without being noticed. 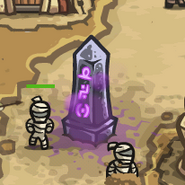 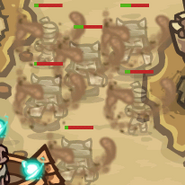 Sand Cloak
Add a photo to this gallery

Retrieved from "https://kingdomrushtd.fandom.com/wiki/Ruins_of_Nas%27de?oldid=52722"
Community content is available under CC-BY-SA unless otherwise noted.