He has 10% health regeneration, recovering 42 HP per second when idle.

Rurin hammers the ground with great strength and deals 60-120 area True Damage. Cooldown: 8.5 seconds (once after every 7 normal attacks)

Rurin Longbeard is a hero specialized in Tanking. He has a rather modest damage output, but a lot of armor and a good amount of health, able to take on most enemies that come in his way, save for Saurian Brutes and Saurian Blazefangs. While he can survive well on his own, it is wise to back him up with some high-damage towers and Barracks, since Rurin's low base damage won't allow him to kill anything quickly. He should be ordered to retreat if a Saurian Brute, or a group of Saurian Blazefangs are coming at him, since he will most likely die against these enemies and pose a problem with his 35 seconds of respawn time, the longest of all heroes in the whole frachise. Other than those, he can tank fairly well, even versus the powerful Saurian Savants, and weaken multiple enemies with Hammer Smash. Tactical use of him can ease down the pressure on a choke point.

He moves at the same speed of Sha'tra, slightly faster than Alric. So, it is advised not to move him around much (especially not between the two lanes in the Dark Descent) unless his health is extremely low. 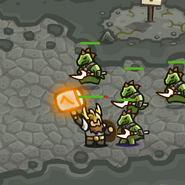 Rurin in action
Add a photo to this gallery

View All Heroes
Retrieved from "https://kingdomrushtd.fandom.com/wiki/Rurin_Longbeard?oldid=51832"
Community content is available under CC-BY-SA unless otherwise noted.