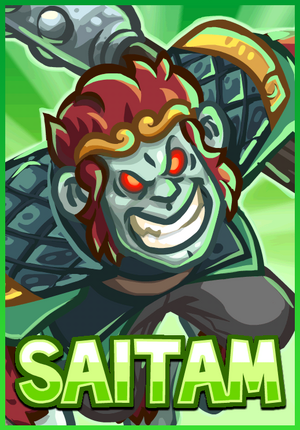 Saitam the Monkey God is a hero in Kingdom Rush: Frontiers, unlocked by paying $2.99 as an in-app purchase. (Sometimes a one-time offer appears for $1.99.) He is unlocked at Emberspike Depths on the Steam version.

Quick to laugh, quick to anger, quick to forgive and even quicker to beat his enemies. A joyful force of good with a bit of a mischievous side, the Monkey God will make you pay if you mess with his sacred grounds.

Either jump aside or tag along, but don’t get in his way.

Saitam the Mighty Monkey God has offered to help restoring the natural balance of his sanctuary. As the real guardian of the temple, he will fight tirelessly to cleanse the corruption cause by the evil outworlders. But even when battle gets tough, Saitam keeps his sharp smile and a positive attitude… Only the smartest of his enemies knows that this actually makes the Monkey God a force to be reckoned with.

Spins his dual Tetsubo dealing 32/69/108 damage* to all enemies around him.
*: incorrectly described in game.

Talk to the monkey hand

I am a God you foolish mortals!
Add a photo to this gallery

View All Heroes
Retrieved from "https://kingdomrushtd.fandom.com/wiki/Saitam?oldid=51180"
Community content is available under CC-BY-SA unless otherwise noted.