The Sand Worm is an enormous beast that appears in the Campaign mode of stage 4 in Kingdom Rush: Frontiers, Dunes of Despair.

The Sand Worm stalks beneath the battlefield, hungering for prey.

Every now and then, a miniature sandstorm forms around one group of your ground units: either soldiers, reinforcements, mercenaries or a Hero. Several seconds after that, the Sand Worm will emerge, mouth first, from the point where the sandstorm appeared. Every ground unit caught by the worm's mouth - friend or foe - will be instantly eaten. Giant Wasps, Ashbite and Bonehart are not affected. The worm then burrows again, and the cycle starts anew.

MUA'DIB Complete stage 4 without losing any soldiers to the Sand Worm. 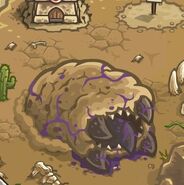 Eating all those swords and shields can't be good for you
Add a photo to this gallery
Retrieved from "https://kingdomrushtd.fandom.com/wiki/Sand_Worm?oldid=53430"
Community content is available under CC-BY-SA unless otherwise noted.