The Sasquatch is a massive beast, long sealed away in a mysterious cave. He only appears in Icewind Pass, where he is shown frozen in ice. Whether the player should free him or not is debatable...

The legendary Sasquatch will help you for an offering in food, gold, and sometimes women.

To free this legendary monster, Rain of Fire must first be used on the cave to break the ice. Only then can the Sasquatch be purchased.

The Sasquatch looks and acts much like a Yeti or Rock Elemental (he's basically a re-skin of the Yeti). He has a fair amount of hit points and a slow but powerful area attack. His rally point range is almost twice as wide compared to the barracks. But his cave is not well-located and two thirds of the range are occupied by rocks and Strategic Points. He regenerates 250 HP for every second when idle.

Unfortunately, the Sasquatch usually is not considered a good investment. He costs 400 gold to purchase (500 on Flash), can only block a single enemy, can't be placed far back, which makes him very vulnerable to Shadow Archers or Troll Champions, and if he dies, he has to be repurchased. It is not recommended to summon him unless you have a formidable defense and extra gold as a few Yetis will kill him. 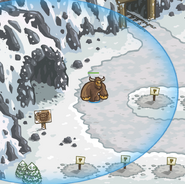 The Sasquatch's fully accessible range
Add a photo to this gallery

LIKE A HENDERSON Free the Sasquatch on the Icewind Pass.

The cave is revealed

Sasquatch vs. Yeti
Add a photo to this gallery

View All Towers
Retrieved from "https://kingdomrushtd.fandom.com/wiki/Sasquatch?oldid=53762"
Community content is available under CC-BY-SA unless otherwise noted.