Scourger Banshees appear after the death of a Twilight Scourger. They have no encyclopedia entry. They are known as Banshees in the mobile version.

The ghostly remains of a Twilight Scourger seek out nearby towers to curse, immobilizing them in a final act of revenge for killing their former living selves.

Unlike other enemies, Scourger Banshee finds and curses nearby towers rather than going directly to the exit. On Steam, possibly due to a bug, Banshees moves for a second, then curse a random nearby tower. Allowing a Banshee to cross the exit doesn't cost you any lives, nor does allowing them to curse a tower. A cursed tower will be disabled for 10 seconds, during which time it cannot attack or be interacted with. Melee Tower units and Runed Bears can still attack, but will not respawn if they are defeated while the curse is still in effect.

A Scourger Banshee is only spawned following the death of the Twilight Scourger, and will never come from an entrance or spawn point on its own. 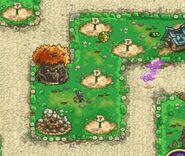 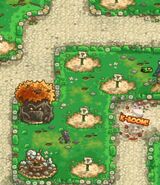 The banshee has been killed
Add a photo to this gallery

View All Enemies
Retrieved from "https://kingdomrushtd.fandom.com/wiki/Scourger_Banshee?oldid=50904"
Community content is available under CC-BY-SA unless otherwise noted.