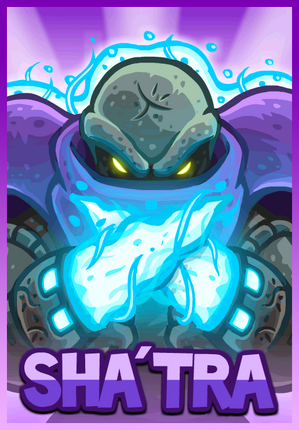 Sha'tra the Skyhunter is a hero in Kingdom Rush: Frontiers. He costs $2.99 on Flash and mobile. He is unlocked at Emberspike Depths on the Steam version.

An awesome hunter from a faraway land. He came here to prove himself worthy by facing the most fierce opponents. With his martial prowess and powerful weapons, he enters any battlefield without fear.

The view from the spaceship window was breathtaking. Sha'tra asked himself how something so terrible and devastating could make the sky burn with all those glorious colors.

Soon the planet would only be specs of dust floating weightlessly in space, very much like his own homeworld.

That brought the memories back, it was a long time ago, but those images were still fresh. The Raad had struck hard and fast.

The proud race of warriors was obliterated before they could even realize they were under attack and their homeworld blown to pieces.

Sha'tra only found out about this a few weeks later, upon returning with his brother from a hunting trip. The joy was replaced with disbelief when the radar of the spaceship could not find their planet on the set coordinates. All was left was some burned boulders and scattered matter floating on the dark void.

Sha'tra' s people were no strangers to death; in fact, they lived every day risking their very existence in pursuit of the mythical Stelar blades. The ancient prophecies spoke of reliques that could grant illumination and the power to bend space and time at their masters' will.

The blades would only be revealed to the conqueror of "the Final Challenge": a confrontation so extraordinary and impossible that would prove beyond the shadow of a doubt that the warrior deserved such honor.

Upon looking over the remains of what he used to call home, he knew what he had to do: fulfill the prophecy to restore his kin and homeworld.

Since then he parted ways with his brother, traveled to dozens of worlds, fought hundreds of battles, and defeated thousands of enemies in pursuit of that mythical battle.

Walking away from the window, he felt the sting of frustration; this last mission had proven to be a bogus chase, and he barely made it out alive.

Those damned Raads had managed to burst the planet he was just on; it seems that their last encounter was still a sore spot for them. Nexus deserved to have more than a hand taken from him after spitting those infuriating lies about his brother joining the Raads. Unfortunately, the coward escaped before he could finish the task.

He maneuvered the spacecraft to elude the debris, set the autopilot and then head to the locker to store his new souvenir. He had managed to collect one from that dying world, as he did with every mission.

His most cherished one was the red Jewell he had obtained a long time ago in a foreign land. He arrived by sheer luck while chasing those disgraceful Parasites, and after quickly destroying them, he joined the hunt for a so-called " God." That Umbra character had turned out to be simply a nuisance, not even worth considering a satisfying rival, but the jewel that pulsed with mesmerizing light was a prize worth the trip.

He held it in his hands and let the burst of power flow through him, then placed it carefully back on the locker and returned to the pilot's seat.

Now he was ready to let his hunter's instinct direct him to his next battle.

If all of Sha'tra's skills are available for use, he'll use them in this order:

Sha'tra is a melee True-Damage machine specialized in picking off foes one at a time. His Energy Glaive, at level 3, can go anywhere from tickling one enemy to weakening an entire horde, due to its chance-based bounce. Purification Protocol can execute several foes already weakened by his other attacks or pour out True Damage onto a single target. His Vibro Blades help him to slay individual enemies, no matter their armor, which makes him a superb duelist. Abduction, at level 3, is an AOE execute that can kill any number of clumped enemies whose total health does not exceed 1000, or pick off just one. Final Countdown is not particularly powerful in and of itself but is often useful for the fact that Sha'tra is best used in the center of an enemy horde, and an unexpected death will hurt all enemies around him.

Sha'tra does not speak in any known language. His quotes are roughly transliterated to Latin here. 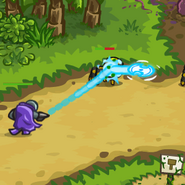 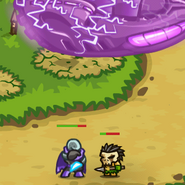 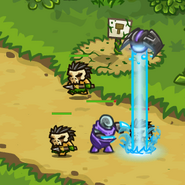 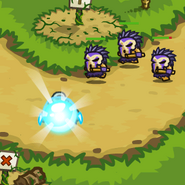 Bye-bye
Add a photo to this gallery

View All Heroes
Retrieved from "https://kingdomrushtd.fandom.com/wiki/Sha%27tra?oldid=53530"
Community content is available under CC-BY-SA unless otherwise noted.