90
Shreds of Darkness are blobs of darkness, spawned when Umbra is defeated.

When Umbra is first defeated, it will split into ten Shreds of Darkness which will be flung to different points on the map. They will then move towards Umbra's plateau in an attempt to reform it. When any Shred of Darkness reaches the plateau, or when two Shreds are killed, all other Shreds will turn invulnerable, fly towards it, and reform Umbra. Umbra's maximum health when reforming is proportional to the number of living Shreds of Darkness; 1000 HP times the number of remnants.

When Umbra is defeated again, it will again split, but the killed Shreds of Darkness will not reappear. Umbra must be defeated a total of four times, or more if you fail to kill a Shred quickly enough.

Shreds of Darkness have quite a lot of health, but lack any kind of resistance and deal only a moderate amount of damage, so barracks can all hold them back relatively well. Having survived the previous 15 waves, your defense should be strong enough to kill 1-2 Shreds before any manage to reach the plateau.

It is advised that you take a look at how to defeat Umbra if you haven't already.

Not even the Fat Boy from the Shop can kill all of the Shreds at once. It can only kill two of them, while the rest will become invulnerable and reform Umbra as usual.

Shred upon explosion of Umbra 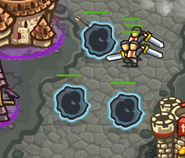