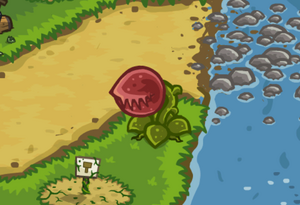 There are five Snapvines in the Campaign and Heroic Challenge modes of Snapvine Bridge. They are initially passive and do nothing until they awaken. The first Snapvine wakes at the start of wave two, and a further inactive Snapvine wakes every following two waves, until wave ten, in Campaign mode.

Waking order
Add a photo to this gallery

In the Heroic Challenge, one Snapvine wakes on every wave. Snapvines do not appear in the Iron Challenge.

Every wave, whenever a unit (friendly or enemy) stands in front of a Snapvine, it will eat that unit (and all units standing in a line from it, in the same lane), instantly killing them. Enemies killed by Snapvines still give gold.

Snapvines cannot eat Gorillons, Ashbite or Bonehart. Snapvines do not manually target Giant Wasps but can still swallow them when they stand in the same line with other units.

When using melee heroes, pay attention to where he/she is going when fighting foes. It is easy for the hero to jump into melee with enemies and sit right in range of a Snapvine. This problem hardly arises with ranged heroes, since you could manually place them in a safe spot, and they do not move to fight foes.

FEED ME, SEYMOUR Feed over 50 creatures to the Snapvines.

Retrieved from "https://kingdomrushtd.fandom.com/wiki/Snapvine?oldid=52796"
Community content is available under CC-BY-SA unless otherwise noted.