The Sorcerer Mage is a Level 4 Magic Tower in the first Kingdom Rush. Upgraded from the Level 3 Wizard Tower, Sorcerer Mages handle forces that are close to darkness itself. They can summon Elementals, powerful and durable units that do area damage, or Polymorph enemies into harmless sheep. It is the only tower in Kingdom Rush to have an intrinsic passive ability: Cursing attack.

Compared to the Arcane Wizard, the Sorcerer Mage has better crowd control and acts as an excellent support tower, thanks to the Elemental, its ability to lower enemy armor and its higher attack rate. The Polymorph ability allows even the toughest enemies to be clicked into oblivion.

Its basic attack has a passive ability to curse the target and halve its physical armor for 5 seconds, whilst also dealing extra true damage over time while the curse is applied (40 damage over 5 seconds). Curse damage does not stack. If the Sorcerer Mage attacks an already cursed target, it only resets the duration of the curse.

Note: curse damage is not factored into the tower's damage values. Counting the curse damage, the Sorcerer actually has a higher minimum damage than the Arcane Wizard.

Polymorphs enemies into harmless sheep. Sheep are very weak but cannot be blocked.

The Sorcerer transforms the target into a sheep (flying enemies are transformed into flying sheep), rendering them incapable of engaging in combat, disabling any abilities, nullifying armor and magic resistance, and halving their original health. However, sheep are unblockable and will still take lives. They will still be targeted by Reinforcements with Spear Throw, Barbarians with Throwing Axes and ranged Heroes. The transformation is irreversible. (Mini)bosses, Skeletons and Husks are immune to Polymorph. Polymorphed enemies can be clicked/tapped to death, similar to sheep and goat critters on various stages, but do not give gold when killed this way on the Flash version.

Summons an Earth Elemental, the stout avatar of the land's power, to block and attack your enemies. (Respawn: 8 seconds)

As the only tower beside the Barracks capable of summoning units on the path, the Summon Elemental ability gives you an exceptionally resilient foot soldier crafted from the spirit of the land itself to support your human soldiers. The Rock Elemental does area damage. An Elemental killed in a level with a Poison Pool will spawn a bounty-less Swamp Thing.

On Flash, the Elemental's stat is a bit different:

ELEMENTALIST Summon 5 rock elementals in any one stage. 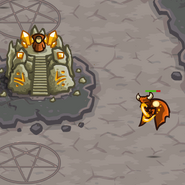 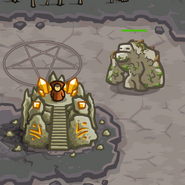 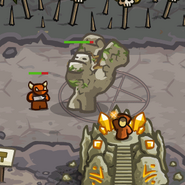 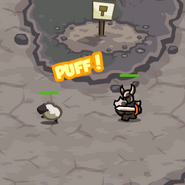 View All Towers
Community content is available under CC-BY-SA unless otherwise noted.
Advertisement