"Arriving at the Stormcloud temple has been the best thing to happen to us in days!

The Stormcloud Sorcerers will now be at your command, General, and they can open a portal straight to Valardul. However, we must provide them with a defense while they complete their spell.

Something... abominable is approaching, and the men are extremely nervous."

Stormcloud Temple is the ninth level in Kingdom Rush comprised of nineteen waves. There are three points of entry: two to the north and the south, leading enemies along curved paths, and one to the east leading a straight route to the temple.

The second advanced magic tower, the Sorcerer Mage, is unlocked on this stage. Additionally, this is the only scenario to feature the Sunray Tower, a unique tower that fires a powerful beam at a single enemy of the player's choice. This tower is only available on the Flash release of Kingdom Rush. 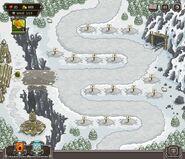 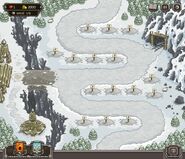 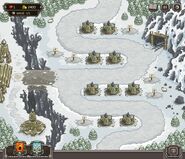 IS HE DEAD YETI Defeat J.T.

Retrieved from "https://kingdomrushtd.fandom.com/wiki/Stormcloud_Temple?oldid=53396"
Community content is available under CC-BY-SA unless otherwise noted.