"Our troops gather around the dread wizard Vez'nan's tower. It is time for a reckoning... time for the final fray. This is the ultimate battle for our kingdom's safety. Every step has brought us to this moment, and there is no turning back.

Now it's time to show our mettle!"

The Dark Tower is the twelfth stage in Kingdom Rush, and the final one in the main campaign. Beating it unlocks Sarelgaz's Lair, Ruins of Acaroth, Rotten Forest, Hushwood, Glacial Heights, Rotwick and Pit of Fire.

Upon completion, the end credits will play.

Vez'nan will start to disable some of your towers starting at Wave 9 at an interval of 16 seconds. The number listed is based on the maximum number of strategic points being used.

After the final wave, Vez'nan will step down from his tower to attack personally. This is not counted as a wave.

Vez'nan will summon enemies out from the circle at an interval of 10 seconds, starting from Wave 6. He will do this up to 3 times per wave.

At Wave 6, Vez'nan will start summoning Demons from one of the three Summoning Circles (never the one closest to the exit). Summoned Demons will grant players gold for killing them, and will be reanimated at the Graveyard.

At Wave 8, Vez'nan will start summoning Demons from the top two Summoning Circles.

At Wave 12, Vez'nan will start to utilize the bottommost Summoning Circle.

On Wave 14, Vez'nan will utilize ALL three Summoning Circles.

There are differences in the waves in some flash versions:

On flash, wave composition is a little different.

THIS IS THE END! Defeat Vez'nan. 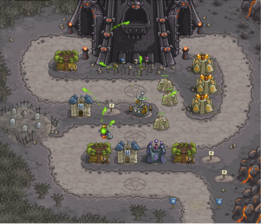 The Dark Tower, completed
Add a photo to this gallery

Retrieved from "https://kingdomrushtd.fandom.com/wiki/The_Dark_Tower?oldid=55140"
Community content is available under CC-BY-SA unless otherwise noted.