The Juggernaut is the first boss in Kingdom Rush, encountered at The Citadel. He often fires missiles and summons Golem Heads.

A mindless unstoppable machine of destruction. The Juggernaut obliterates any army that tries to stop him.

The Juggernaut doesn't have much going for him beyond being a construct while his minions, unique to his fight, can be spawned via cluster bombs anywhere on the map that isn't past the 3 Imperial Guards at the top, with decent stats going for them. He has one particular key problem: well-upgraded Paladins can put him in a melee lock loop. The Juggernaut does have an area attack and a long-range missile launcher, but they don't do enough damage to wreck fully upgraded Paladins. This isn't too bad, though, because he's the first boss. He is not supposed to be very difficult, but to show the player how important it is to focus on a combination of stalling and sheer dps to take on extremely durable enemies.

NUTS AND BOLTS Defeat The Juggernaut. 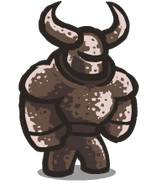 The ball that the Juggernaut fires, from which Golem Heads emerge.

A missile that the Juggernaut fires.

The Juggernaut's head on the pike.

When defeated, the Juggernaut will collapse into a pile of metal.
Add a photo to this gallery

View All Enemies
Retrieved from "https://kingdomrushtd.fandom.com/wiki/The_Juggernaut?oldid=49627"
Community content is available under CC-BY-SA unless otherwise noted.