Thor is a hero in Kingdom Rush. He costs $4.99 and is not available on Flash. He is unlocked by completing Forsaken Valley on the Steam version.

Thunder made flesh, this gigantic demigod wields a warhammer enchanted with the power of lightning and thunder. He is the son of the Storm God, and a trusted friend of King Denas.

Thor's attack has a 25% chance to unleash a surge of electricity that chains to multiple enemies, dealing true damage to primary target and magic damage to nearby enemies.

Thor throws his hammer to summon a lightning bolt from the sky, stunning targets within a specified radius for 2 seconds and dealing True Damage (magic damage on iOS) to primary target and magic damage to additional targets. (Cooldown: 15 seconds)

Look out behind you! 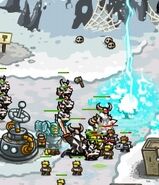 Death of Thor
Add a photo to this gallery

View All Heroes
Retrieved from "https://kingdomrushtd.fandom.com/wiki/Thor?oldid=54427"
Community content is available under CC-BY-SA unless otherwise noted.