This article is about the second major spell in Kingdom Rush: Origins. For the extra spell in the Flash Premium Content of Kingdom Rush, see Lightning Bolt.

Thunderbolt is the second of three major spells in Kingdom Rush: Origins. It replaces Rain of Fire from the previous games. To use the spell, the player must select it and tap anywhere on the enemy path, then 3 lightning bolts will shoot down from the heavens. Though it deals less damage than Rain of Fire due to the lack of an equivalent to Rain of Fire's Scorched Earth, it is more accurate, as instead of taking a few seconds to reach the ground, the bolts hit immediately and the random bolts from Furious Tempest, its final upgrade, only strike enemies instead of being totally random like the equivalent Cataclysm. Moreover, all enemies on the map (except for Bandersnatches) are slowed down as long as the spell is shooting lightning.

Like Rain of Fire, Thunderbolt is not to be used liberally because of its long cooldown.

ONLY COUNTS AS ONE Defeat 10 enemies with a single Thunderbolt. 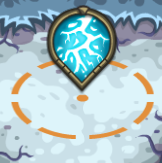 Lightning strike
Add a photo to this gallery
Retrieved from "https://kingdomrushtd.fandom.com/wiki/Thunderbolt?oldid=52873"
Community content is available under CC-BY-SA unless otherwise noted.