The Tribal Axethrowers is a Level 4 Archer Tower in Kingdom Rush: Frontiers. The totem contains two tribesmen who throw axes which deal heavy damage, but have limited range and attack rate.

Compared to its counterpart, the Crossbow Fort, the Tribal Axethrowers fulfills a more supportive role, with its abilities concentrating on weakening enemies for other towers rather than dealing direct damage.

The wildlings are covered in mystery and occult forces, but their axes show deadly precision.

Creates a totem that weakens* nearby enemies and makes them suffer 40% more damage from all sources. It also halves the melee damage of afflicted foes. (Cooldown: 10 seconds)

Creates a totem that dispels all magic and silences spellcasters in range. (Cooldown: 8 seconds)

The ability affects the following enemies:

CULL THE WEAK Weaken 100 enemies with the Totem of Weakness. 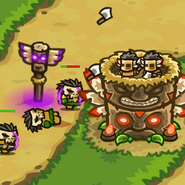 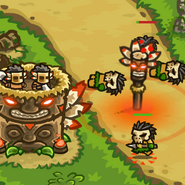 Totem of Weakness
Add a photo to this gallery

View All Towers
Retrieved from "https://kingdomrushtd.fandom.com/wiki/Tribal_Axethrowers?oldid=52990"
Community content is available under CC-BY-SA unless otherwise noted.