Twilight Scourgers are Twilight elves wielding a whip. They are known as Scourgers in the mobile version.

A mistress of darkness and pain, her allies fear her scourge more than any enemy.

Twilight Scourgers can hit their own allies with their whips (cooldown: 7 seconds/5 seconds in Impossible mode), dealing damage to them to speed them up by 40% and double their attack power. They pose little threat when alive, as they are neither durable nor numerous, and their ability isn't too dangerous either. When killed, however, their ghostly Scourger Banshee will fly towards the nearest tower and disable it for 10 seconds, if there is actually a nearby tower to disable. If they fly too far forward without finding any tower or if they are too close to the exit, they will simply vanish harmlessly. Later on, they appear in large groups, so expect your towers to get cursed often. 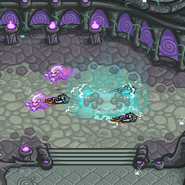