20
Vasile is a vampire who resides in the Dusk Chateau - a castle built on the mountains near the Rift of Cinders and the boss of the Shadowmoon mini-campaign in Kingdom Rush: Frontiers.

The Everlasting Prince has been a dark and vicious menace over the kingdom since its foundation.

During the stage, Vasile mostly stays in the castle. At the start of every wave or every time the Moon is full, he walks to the balconies to taunt the player, where he can neither be selected nor targeted.

After wave 15, Vasile will send out a large wave of Vampiresa before he attacks, heading towards the western exit. He has an ability to bite into a victim's neck healing himself by 450 HP. It kills soldiers unless they are lucky with dodge or Holy Grail, but deals just 150 True Damage to heroes.

When he is defeated for the first time, Vasile will transform into a bat, fly back to the castle before emerging to attack for a second time, alongside a new wave of Vampiresa. This time, he chooses the eastern path and also possesses a much improved version of the Phantom Warrior's death aura. Besides, it affects both living and undead units. Tribal Axethrowers' Totem of Spirit cannot disable the aura.

When Vasile dies, most enemies will also die immediately, except for a few Vampiresa that have not landed yet, who must still be killed before the stage ends.

In the Heroic Challenge and Iron Challenge modes, after Vasile is killed, a businessman has decided to turn the Dusk Chateau into a haunted theme park, titled 'Dusk Chateau Scare Tour', with a box office already open at the entrance.

Like many other villains in the series, Vasile has a full repertoire of jarring taunts that he uses to unnerve his foes.

When the Moon is full:

DEAD AND LOVING IT Defeat Vasile, the Everlasting Prince 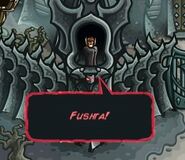 Vasile standing outside of his Chateau.

Vasile floating to the exit.

The second phase of Vasile, with his Death Aura.

Vasile burns to ashes upon his death