Vez'nan is the main antagonist of the Kingdom Rush franchise. He is King Denas’s arch-nemesis and is responsible for nearly all the events that take place after Kingdom Rush: Origins.

Vez'nan is the main antagonist, the third and final boss in the main campaign of Kingdom Rush. He has one of the lowest health of any Campaign boss in the game (except Myconid), but also hits the hardest of any boss in the series.

The most evil being you will encounter. Watch out for his evil bad jokes!

From Wave 9 onward, Vez'nan periodically casts a spell that disables towers. The spell is initially dispellable by clicking/tapping on the tower rapidly, however, after a few seconds, the spell becomes undispellable and will only end after approximately 10 seconds. As the stage progresses, Vez'nan will cast the spell simultaneously on more and more towers, making it nearly impossible to dispel all of them before they become undispellable. Vez'nan can also summon Demon Spawn and Demon Hounds from the summoning circles on the map. On flash, his Soul Drain attack instantly disintegrates soldiers (except Earth Elementals).

When his humanoid form is killed, Vez'nan will transform into a giant winged fire-breathing demon, which must also be killed. This form is significantly faster, allowing Vez'nan to easily reach the exit if he is near enough to it, but otherwise, it is actually weaker, since Vez'nan can no longer disable towers, summon demons or use the special Soul Drain attack.

Vez'nan has a full repertoire of jarring taunts, threatening phrases, and ironic culture references that he uses to unnerve his foes. Fortunately, he is easily ignored...

THIS IS THE END! Defeat Vez'nan.

Vez'nan's soul in a cage next to Moloch's throne.

After Moloch is killed. 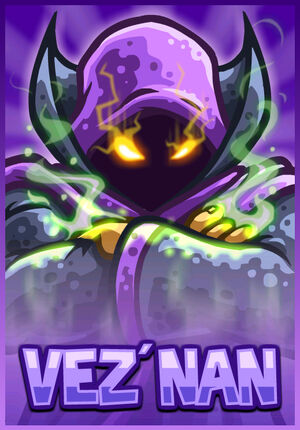 Vez'nan the Dark Wizard is a Hero in Kingdom Rush: Origins. He is the younger version of the villain Vez'nan from Kingdom Rush. He is unlocked by paying $4.99 as an in-app purchase and is unlocked on Shrine of Elynie on Steam. He starts at level 5.

The most powerful wizard that Linirea has ever known. He abandoned spells and tomes for the very power of souls. Some fear he may have exchanged his own soul to obtain demonic abilities. All power comes with a price but Vez'nan has gone far beyond that.

Summons a mighty demon to fight enemies for 30 seconds. Its spawn stuns nearby enemies for 2/3/4/5 seconds.
The demon deals True Damage both in melee and ranged. [4] [5]

Vez'nan is best used behind either reinforcements or barracks troops, due to his low health, but once protected, he is one of the best heroes in the game at crowd control, as most of his skills have an area-of-effect. His regular attack deals great damage at Level 10, and combined with Magic Shackles, Soul Burn and effective meatshields, Vez'nan is more than capable of taking out wounded Ettins or Bandersnatches alone. As a result, he is extremely agile, capable of being used against almost any enemy- so long as he has backup.

Vez'nan can teleport, so don't be afraid to move him around the map to where he's needed most. He does not tank effectively, but can be used for the guerrilla tactic: sniping out enemies from afar, and secretly follow targets as they move out of range.

Vez'nan's demon is equally versatile, and excels in both melee and ranged combat - in the later case his attacks have area-of-effect that can heavily wound large groups of enemies. Place the demon in the middle of a large swarm of enemies, regardless of how powerful they are, and the demon's massive health and high AOE damage is more than capable of thinning out the pack, if not completely destroying it, in almost any case. The demon can hold the line against almost any enemy - however, due to it's long respawn time, it's recommended that you do not use it frivolously on small number of weak foes. The Demon can also tank against powerful enemies and even some bosses, like Hi-Hi Enha and Malicia, and usually kill or at least inflict a good deal of damage to its opponent.

The Demon has different names each time it is summoned.

"Take the shackles off my feet so I can dance"

Your soul is mine! 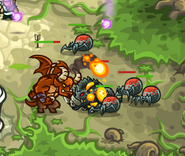 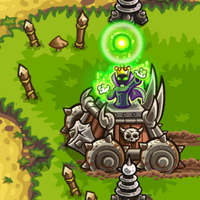 Vez'nan is the immediate superior of the protagonist of Kingdom Rush: Vengeance. After having escaped from the clutches of Moloch (with the help of Oloch, Moloch's little brother), Vez'nan is once again ready to conquer Linirea for the second time.

Vez'nan gives briefings to the player at the start of all stages, but only personally takes to the battlefield himself in the final level, Denas's Castle, in Campaign mode. He stands at the back of the level and cannot be attacked by anything.

In this level, tapping on Vez'nan when he's ready will cause him to shoot a green fireball at the enemy closest to the exit, dealing 800 True Damage to the target and nearby enemies. This is enough to kill most enemies, except Cavaliers (who will only get dismounted) and High Sorcerers (who have enough HP to survive).

At the end of wave 7, Vez'nan will focus his power to destroy the ramparts of the castle, killing the Citadel Archers and allowing his men to advance further, setting up the second part of the stage. Once wave 15 ends, he will focus his power to summon the Archdemon, to which King Denas will respond by tasking three of his men to drink a super serum, turning them into Paragons. At this point, Vez'nan can no longer fire the green fireballs; tapping on him when he's ready will instead cause the Archdemon to use its special slam attack.

After Beating the Third Paragon:

BE CAREFUL WHAT YOU WISH FOR

Vez’nan stepped back and admired his work, his pentagram conjuration ready. His plan to conquer Denas’s castle was in motion. The Dark Lord knew he had the element of surprise on his side, as no one had dared to attack Linirea since ancient times. All he needed now was an army that would grant him his victory.

There was nothing he wouldn’t do to make sure his campaign was successful, and making pacts with ancient entities was something he needed to do. He was fully aware that alliances like this demanded hefty payments, but since his soul was already bound by a previous pact he had made, he would have to bargain with something else.

He smirked at the thought of his old teacher, Nivus, finding out about his plans. The old wizard would find his actions despiteful and think of him as an abomination.

But the old man had never had as much power in his hands as Vez’nan had now, nor did he ever feel the intoxicating pulse of magic emanating from the jewel that whispered to him from the tip of his staff: the magnificent Tear of Elynie.

It was time. As soon as he started chanting his conjuration spell, the grass surrounding the pentagram rotted and the air became tainted with the stench of rotten flesh and sulfur.

Soon the heat became almost unbearable as the Ghost Kings materialized on the now corrupted field. There was something utterly unnerving about the ways the brothers mirrored each other’s movements as both pairs of hollow eye sockets fixed on him.

Vez’nan started with the negotiations immediately. He wanted to be done with this deal as fast as possible to be able to focus on the next step of his plan. There was no time to lose.

After much discussion, the kings agreed to grant him the command of their undead army to secure Linirea’s throne. Their price was also set: they required the souls of every enemy soldier fallen in battle. The price did not bother Vez’nan at all, as it was merely collateral damage. A means to an end. They signed the contract with blood and soon the kings disappeared from the field. The deal was done.

“Now we are ready,” the crimson red tear whispered to Vez’nan. “Let the journey begin.”
Community content is available under CC-BY-SA unless otherwise noted.