Xyzzy is the king of the Saurians, and the boss of the elite stage Darklight Depths in Kingdom Rush: Frontiers.

The Saurian King is a colossal lizard that hammers fear home on his enemies.

Xyzzy is a giant Saurian Myrmidon, with fast speed and medium armor. He is the fastest boss in the series, as well as being tied second most armored, being beaten only by Lord Blackburn and rivaled by Hi-Hi Enha.

Xyzzy also possesses a special area attack where he smashes the ground 8 times with his cybernetic hammers. The attack has a cool-down of 10 seconds, and the damage increases with each hit—the first hit deals only 5-10 damage but the seventh and eighth hits can deal over 100. Its AoE reaches over a third of the map and the closer to him, the more damage soldiers receive. This attack is able to harm Ashbite and Bonehart, even though both of them are flying, possibly due to the energy packs inside his hammers. When forced into melee, Xyzzy can catch soldiers with his tongue, swallowing them whole, effectively instantly killing them. Heroes are immune to this, although they are unlikely to survive Xyzzy's special area attack.

The Saurians’ rumors had been right: a god-like creature was roaming their lands!

Saurian King Xyzzy looked at the being that was standing in front of him. He could tell it was badly wounded as blood dripped from its side and its movements were obviously painful. It was clear it needed help and that was the reason it had approached their village.

Anyone would have thought the creature was easy prey, but Xyzzy had heard that even in its weakened state, it could obliterate any enemy with a blast of light in seconds.

As the blast surged from a shiny device the creature was holding on its hand, Xyzzy knew this was not magic. The Saurian had never seen any weapon of its kind before. However, he immediately thought that if his people possessed such power, they would become a force to be reckoned with.

Xyzzy slowly approached the being and signaled one of the tents where bandages and medicinal herbs were offered to it.

With this gesture, a bond was created, one that would change the Saurian’s way of life forever. The being decided to stay, and as a show of gratitude taught the Saurians how to create and operate its homeland technology. 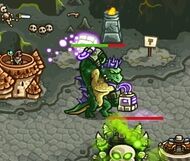 Xyzzy defeated!
Add a photo to this gallery

View All Enemies
Retrieved from "https://kingdomrushtd.fandom.com/wiki/Xyzzy?oldid=54705"
Community content is available under CC-BY-SA unless otherwise noted.